These two aspects of contributing configuration to the repository are cleanly separated in the YAML resources. Let’s address them one by one.

In order to specify when a specific set of configuration should be merged into the Configuration Model, we must be able to express what dependencies our configuration has, i.e. what other configuration needs to be in place before we can successfully add our piece of configuration. For this, CMS 12 implements a 3-level dependency model, consisting of Groups (top), Projects (middle) and Modules (bottom)1.

All configuration must be part of exactly one Module, which belongs to exactly one Project, which in turn belongs to exactly one Group. At each level, we specify after which sibling(s) our configuration must be contributed. These dependencies are expressed using dashed arrows in the drawing above. Dependencies must only be specified between siblings, i.e Module 1aY declares its dependency on Module 1aX, but Module 1bX must not declare a dependency on Module 1aX, as they are not siblings. Instead, Project 1b must declare its dependency on Project 1a. All Groups are considered siblings.

As a best practice, the granularity of Modules, Projects and Groups should be chosen such that Modules and Projects match their counterparts in Maven terminology: i.e. typically, a Module’s scope is similar to the scope of a Maven module and a Project’s scope to that of a Maven project. As such, a Module is typically represented by a JAR file at runtime.

Each Module must specify these dependencies in its hcm-module.yaml2 file. When packaged into the module’s JAR, the file must be located at the root level of the archive, and typically, it lives under /src/main/resources/hcm-module.yaml in our Maven module.

This YAML example specifies that our Module should be added to the Configuration Model by the name extra, and that it should be added after the sibling Modules base and config have been added. Furthermore, the example specifies that the Module is part of the Project mywebsite, and that - within the scope of our Module - Project mywebsite does not depend on other Projects inside the custom Group. However, since the Module also depends on configuration contributed by Bloomreach Experience Manager, it specifies that the custom Group depends on the hippo-cms Group.

Like this, our Module specifies when its configuration should be merged into the Configuration Model.

As stated previously, all configuration is contributed by a Module. For optimal maintainability, the configuration provided by a Module can be grouped into / distributed over multiple YAML Sources, which in turn can refer to (not YAML) resources. There are few restrictions to the ways in which this grouping can be done, and typically, grouping is applied semantically, i.e. based on the meaning or purpose of the configuration. 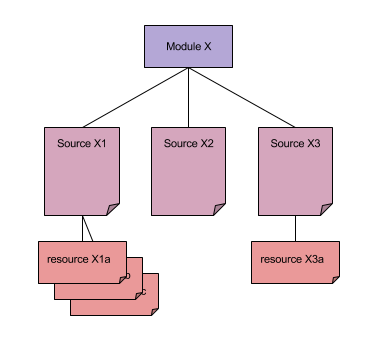 Each Source is represented by a YAML file. The Sources of a Module are associated with that Module when they are located inside the hcm-config folder of the Module. In other words, when CMS 12 finds a hcm-module.yaml file at the location described previously, it will check if there is a hcm-config folder in that same directory, and scan its content for files with a *.yaml extension. All found YAML files are then considered Sources of that Module.

There is no explicit link between hcm-module.yaml and the related Source YAML files, nor any ordering between Source YAML files, such that you can rearrange Sources of a Module freely and easily, as long as they stay inside the hcm-config folder.

Sources of configuration are represented by YAML files. As described above, the exact name of a Source doesn’t matter, as long as it has a *.yaml extension.

A configuration Source supports up to 3 types of definitions:

Above example Source defines two namespaces foo and bar, as well as their node type definitions (CNDs). The exact definitions are specified in the external resources, found in the cnd sub-folder of the folder in which this Source file resides. We include a minimalistic config definition and web file bundle to show how they exist beside the namespace definitions.

1 Before CMS 12, these dependencies were implicitly expressed by using appropriate ranges of sequence numbers for the initialize items. Making them explicit in CMS 12 improves the understanding and maintenance of these dependencies.