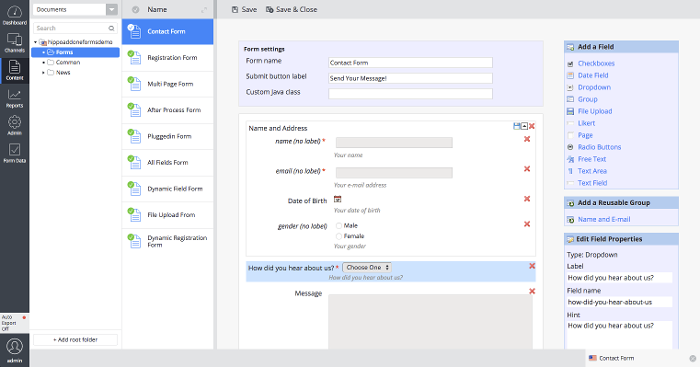 This plugin consists of three modules: a CMS module, a repository module and an HST module.

Instructions on how to obtain and install the CMS and repository modules can be found on the Install CMS Plugin page.

Instructions on how to obtain and install the HST module can be found on the Install HST Components page.

Pick the same Migration Demo Project version as the Enterprise Forms version you are using.

You can build and run the Enterprise Forms Migration Demo Project, like any other Bloomreach Experience Manager project, using Maven. See the included README.txt for detailed instructions.

In the root folder of your local copy of the Enterprise Forms Demo Application, you can build it like the following:

Now, run Tomcat with cargo.run profile in the root folder:

Like other Bloomreach Experience Manager projects, you can create a project distribution tar.gz file to deploy it to other Tomcat server.

SMTP connection configuration is configured in conf/context.xml like this:

If you use a different SMTP port or an external SMTP server, then please change the configuration there.

For setting up a local SMTP server for testing, refer to the following section.

It is very handy to be able to run an SMTP server locally to test with if you don't have access to a full mail server.

If you've got Python 2.x installed, then you can do this really easily.

Assuming you want to open the SMTP Server at port, 2525, you can run the following:

When the app sends an e-mail, you should be able to see it scroll by on your terminal.

If you want to open SMTP server socket at a different port (e.g, 25) instead, then you can put port number argument like the following:

The above command will open the server port at 25 instead. (By the way, in most operating systems, opening a port below 1024 requires `sudo' access.)

WARNING: This is only for local testing purpose, dumping the message in console, having no knowledge on how to handle the messages.

If you don't have Python 2.x installed, download Python 2.7 installer package from the following siteand install it on your system. - http://www.python.org/download/

When using Python 3.x, the above command doesn't print any output to the console. Try aiosmtpd instead.

To test the Enterprise Forms Migration Demo project, you can do the following steps: