The channel manager allows a webmaster to manage multiple channels inside the CMS. A ‘channel’ can be any HST site, like a website, mobile site, REST API, etc. Each channel is tied to one mount inside an HST host group. A mount references the channel it belongs to. Mounts without a channel are not shown in the channel manager. 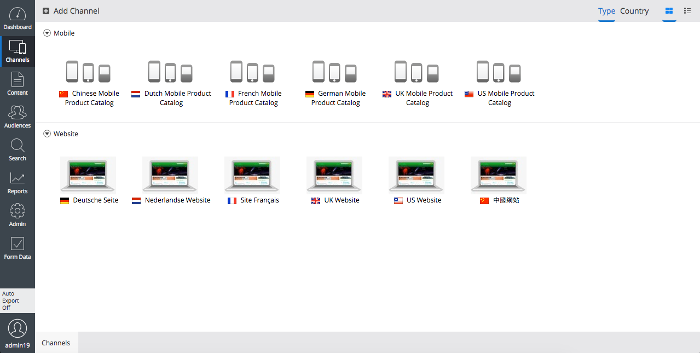 The CMS shows an overview of all available channels. Each channel can be previewed inside the CMS. When the hst:manageContent tag is used, the preview shows a button next to each rendered document that opens the visual editor for that document. Similarly, when the hst:cmseditmenu tag is used for a menu, a button will be shown that allows the webmaster to edit the menu. The Channel Editor can be used inside the same preview, allowing a webmaster to add components to containers inside the page. 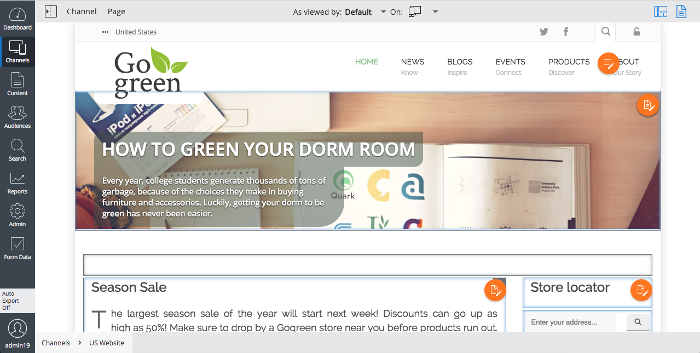 Developers can define a channel's configuration parameters in a Java interface. These Settings can be configured to be editable or read-only in the Channel Manager, see Workspace Configuration. HST components can access these properties via Java interfaces. 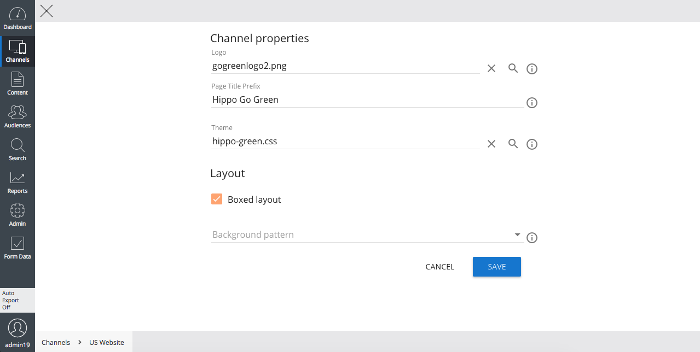 Besides managing existing sites, the channel manager can also create new sites from blueprints defined by developers. A webmaster only needs to click 'Add channel', select the blueprint to use, and provide a name and URL for the new channel.

To show an HST mount as a channel in the channel manager, you must create an hst:channel node for it that contains the name of the channel and (optionally) the channel properties and the interface name to access them.

For example, we have a channel called 'example' with the URL ' http://www.example.com'. The HST host configuration would contain the mount

To show this channel in the channel manage make sure the hst:channel node exists in the configuration:

The channel manager overview will now show the channel with the name ‘Example’ with the URL ‘ http://www.example.com'. Note if the channel settings need to be editable, configure the channel as below, also see  Workspace Configuration.

HST allows multiple host groups (e.g. to distinguish different DTAP environments). Depending on the HST version, different mechanisms are used to determine which host group is used by the channel manager.

HST needs to know the URL of the CMS in order to create the right preview mounts automatically. This is specified in the property hst:cmslocation of the host group node. For example:

The property hst:cmslocation can contain a comma separated list of cms locations, for example

By default, all users have read-only access to the channel manager. They can see the channel overview and preview existing channel. All users in the group 'webmaster' can also create new channels and edit existing ones. Admin users can always do everything.

For example, the following YAML source definition adds the user 'editor' to the group 'webmaster':

If you want channel filtering different from the default enabled filtering based on whether the cms user can read the content of the channel, you can plug in your own filters. See Channel Filtering how to achieve this.

How do I get the 'Add Channel' button?

The 'Add Channel' button will only be shown if:

How do I remove the ' _cmsinternal' suffix from the preview URLs in the CMS?

How do I remove a channel

The channel manager can be removed entirely from your project by removing the following artifacts from the pom.xml in the cms module:

Since the channel manager relies on HST, it has to be removed when you want to run the CMS without HST.