Security Authorization Management (aka Information Access Management, IAM) is all about answering the following question: Who is allowed to do What, Where?

For the Bloomreach Experience Manager (brXM) the information which is used to answer this question is all managed through the following high-level authorization model: 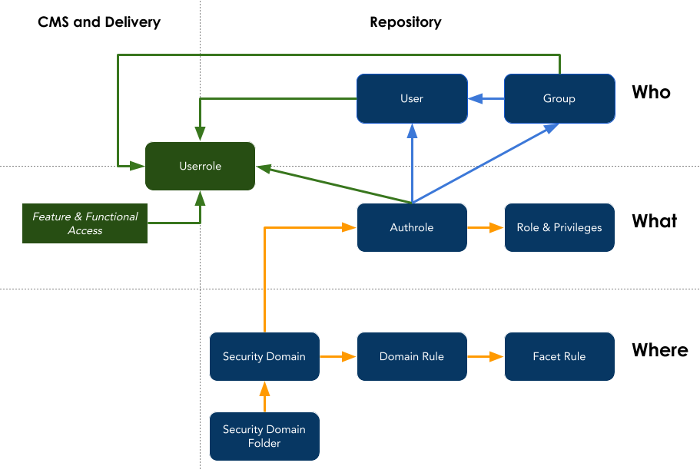 The items Userrole and Feature & Functional Access are new in brXM v14!

The Who part of the authorization question typically needs to be answered with a specific user or set (group) of users.

The brXM model provides three ways to define, and then select or reference a specific user or sets of users:

Users can either be a 'regular' human user or as a 'system' user. System users are used for internal or background/integration processes, and are not allowed to login interactively in brXM.

For each user a basic (minimal) set of data can be stored, like the mandatory username, first name, last name, email, password, etc, as well as the flag to indicate a system user. Another important property of a user is the 'active' flag, which can be used to enable or disable login for a user.

Users can be managed by the CMS or automatically imported and synchronized from an external provider like LDAP.
While a few builtin system and default regular users are automatically provided by brXM, and developers may add more predefined users as well, users are otherwise considered to be environment specific and treated as category system data in the repository.

Groups are used for organizing sets of users with a common organizational or functional responsibility. Groups, like users, can be granted specific roles within repository security domains, and/or specific userroles (see below). Users which are member of a group automatically inherit all its userroles and the roles granted to it within specific security domains.

Some of these privileges are effective globally, for example the privilege to login into the CMS (userrole xm.cms.user) or having access to the Channels application (xm.channel.user). Other Userroles may only be effective within the context of one or more security domains, for example the privilege to administrate one or more channels (userrole xm.channel.admin), which obviously requires both the xm.cms.user and xm.channel.user Userroles to be granted for usage within the CMS.

The usage and purpose of Userroles lies somewhat between Who and What,  and between the functional and feature access toggles for the CMS and Delivery and context specific privileges for Repository security domains.
The diagram diagram therefore places the Userrole element in the crosshair between these 4 dimensions.

The brXM product and its default provided security domains now primarily uses Userroles for answering the Who question and no longer uses, nor requires, the default provided (regular) Users and Groups!

What a user is allowed to do is determined by which privilege(s) that user has, either directly and globally as a Userrole privilege, or via a Role granted within a specific security domain (the Where part, described further below).

A new security feature introduced in brXM v14 is making direct use of the Userroles granted to a logged in user for determining access to specific features and functionality. This is useful in cases where the Where question, with respect to repository content, is not relevant or applicable.
For example to check if a user is allowed to login into the CMS (has userrole xm.cms.user: yes/no) or allowed to manage user security (has userrole xm.security.user-admin: yes/no).
Or if a Delivery Tier Authenticated user has a (custom) userrole intranet.staff required to access a (more) secured section of an intranet site.

If a logged in user has a specific userrole can be checked programatically through the new HippoSession.isUserInRole(<userRoleName>) API, and in the delivery tier also through the standard Java Servlet / JAAS HttpServletRequest.isUserInRole(<userRoleName>) method. Or more declaratively through specific configuration. For more details see the Userroles and Delivery Tier Authorization documentation.

Roles define sets of repository privileges (what) which can be granted to Users, Groups or users having a specific Userrole (who), within security domains (where). Such a grant is configured through an Authrole.

And because an authrole is always defined for a specific security domain, it effectively "glues" together the Who, What, and Where for repository content authorization.

Roles, similar to userroles, also can include or imply other roles. A role will inherit all privileges from its included or implied roles, recursively.

A Security Domain defines a set of repository nodes, for example documents, for which specific access privileges can be configured, using authroles (see above).

A security domain is defined in a query-like manner based on facets (properties). This allows the repository to return the correct nodes in queries and faceted views, like facet select, without having to evaluate the access rules for all the nodes individually.

This keeps query execution very fast, even when the amount of nodes is in the millions and the user is only allowed to see (read) just a few of them, because no filtering of the result set is needed afterwards.
Furthermore, as a major improvement since brXM v14, practically all standard provided facets rules are now using the hierarchical jcr:path or jcr:uuid facets, which further simplifies and optimizes both the acces rule evaluation and query execution.

At login all the repository roles for the security domains the user has are parsed. This makes evaluating the rules faster in the access manager. When the effective domain security configuration for a user has changed, the user has to logout and login back again to effectuate the new authorization rules.

A Domain Rule is a container for one or more facet rules.

A Facet Rule defines the rules for which a repository node is tested whether it belongs to the security domain. For more technical details on the type of facet rules available and how to configure them, see the dedicated Domains documentation page.