Kubernetes is an open source container orchestration engine for automating deployment, scaling, and management of containerized applications. It has become very popular among organizations that want to manage different kinds of applications within the organization in a uniform way.

Starting from version 13.1.0 of brXM, Bloomreach provides official support for running brXM in Docker containers. Since Kubernetes is simply a way of managing Docker containers, it is also possible to run brXM in a kubernetes cluster.

How to build a Docker image, how to pass the necessary environment variables to a Docker container, and ping filters as health check endpoints are mentioned in the documentation. Out of these pieces of information creating a kubernetes deployment manifest file is straightforward. There are also developer blog posts containing sample YAML files. However, running brXM in a containerized environment brings in additional challenges which are not obvious to an operations engineer configuring the kubernetes environment. In this document we list these challenges with some technical background and how to solve them. 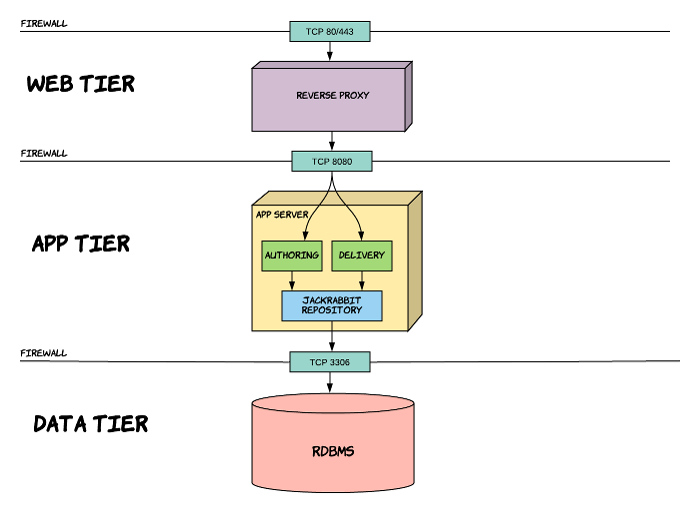 Clustering and The Lucene Index 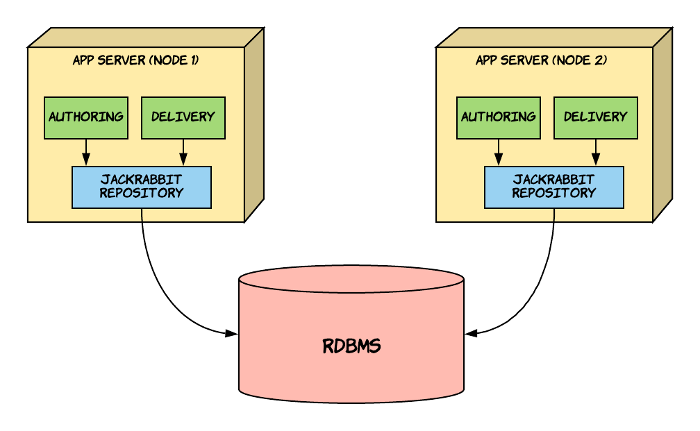 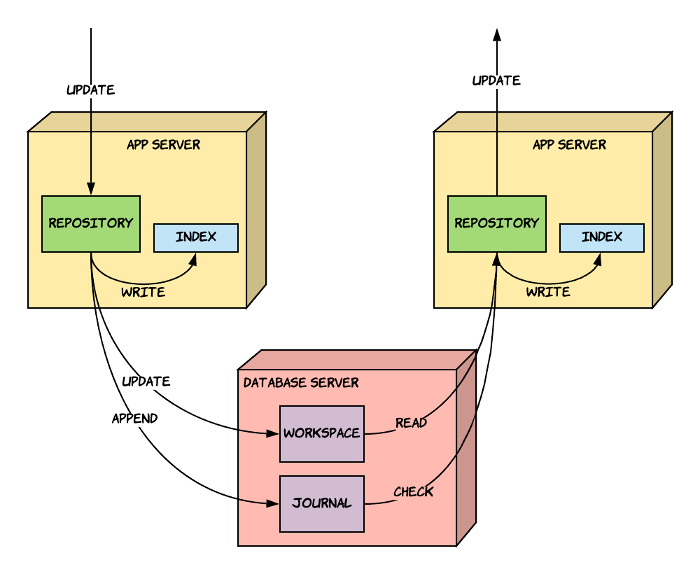 One limitation of the authoring (CMS) application is that it is a stateful application. This is not ideal for cloud-based environments because it requires additional work in load-balancers/web servers to get brXM CMS to work properly. The CMS application requires that there be a session-affinity setup. Session affinity means the user who’s connected to one cms pod should keep using the same pod in subsequent requests. Without the session affinity setup, brXM pods that have the cms.war cannot be scaled horizontally.

Bloomreach recommends setting up cookie-based session affinity. There are many ways to solve this requirement. For example in kubernetes this can be achieved with an ingress annotation such as https://kubernetes.github.io/ingress-nginx/user-guide/nginx-configuration/annotations/#session-affinity

Note that the session affinity requirement cannot be solved by “externalizing” the session as many clients have already inquired (using Redis for example). This is because the session used by the application contains an unserializable object and the reimplementing the system around this limitation is a significant amount of work. There is also a potential performance concern, in that the server-side session can contain a significant amount of GUI state data which would be slow to propagate between nodes on each request. Session affinity avoids the need for cluster nodes to serialize and deserialize this state on each request. Because of these reasons,  the session affinity requirement unfortunately has to be solved at the infrastructure level.

Because of the session affinity requirement, downscaling brXM pods becomes problematic for users who are logged into the CMS. Since users of CMS have to keep using the same pod, the session for the application container within the pod is lost when the pod is killed.

The downscaling of brXM pods will have to occur during upgrades to kubernetes itself. If no special action is taken there will be work disruption in the CMS. Bloomreach Cloud has a special session draining implementation to get around this issue. This implementation makes sure the traffic is moved from old to new pods while monitoring the number of logged in users within the CMS.

A brXM project deliverable (a Docker image of the current state of the project) is said to be backwards-compatible when it satisfies the conditions mentioned in the documentation. To be on the safe side most deployable images can be considered as backwards-incompatible; especially in the early stages of brXM project development (since there will be many document type related changes as the project content model takes more concrete form). If a backwards-incompatible distribution is deployed against a database, the only supported way of deploying a previous version of the application against the same database is restoring the previous state of the database first before deployment. Therefore the backwards-compatibility of the Docker image affects the choice of deployment model.

The Bloomreach Cloud hosting offering (BRC) provides the option to choose the deployment model per deployment.

In most circumstances a backwards-incompatible change mainly impacts the site rendering because the client has changed something that is important for their pages and components. Older pods that haven’t been upgraded spend some time feeding new data to old implementation code, which fails in unpredictable ways for whatever requests happen to be in flight during the transition.

In some cases, and in particular for brXM major version upgrades, the side-effects can be difficult-to-debug Jackrabbit-level inconsistencies with built-in node types. The rolling deployment model MUST NOT be used for major version brXM upgrades.

The start-stop deployment strategy (or “Recreate” in kubernetes terms) means stopping all running pods before deploying pods with the new version of the application. This model will prevent issues that may arise from backwards-incompatibility but it comes with the price of downtime during deployment. If some downtime is acceptable, it is advisable to go for this deployment model. This is most likely to be the case for a development environment or an internal testing environment. It can also be acceptable for some types of intranet use cases, where downtime during non-business hours can be arranged. It is much less likely to be suitable for a public-facing website.

Note that if rollback to a previous version is necessary, a compatible database backup must be restored before deployment (in case of non-backwards compatible project images). The new version of the application might have changed the database in an incompatible way.

In blue-green deployments one maintains two identical environments (brXM and database). One is called blue, the other green. At any given time only one of these environments is active or receiving traffic. Development teams prepare the non-active environment for deployment and when proper testing is done, switch the traffic to the new environment. Since two separate databases are used there is no worry about backwards compatibility. The deployment process goes like the following:

The blue-green deployment model has the advantage of not causing downtime for site visitors. It also prevents strange and hard to debug issues that may arise from deploying backwards-incompatible images. Although this comes with some disadvantages too: The underlying infrastructure becomes more complex to maintain, as there are now two environments to manage. There is an organizational challenge as well, since a content freeze needs to be communicated effectively. This also makes automation of blue-green more difficult.

Over time, the database backing the brXM Jackrabbit repository accumulates data that is obsolete for current operations. Periodically, one has to execute SQL queries against the database to clean up this redundant data and prevent performance degradation. More information on this topic can be found in the documentation.

There are 3 queries to be executed which are mentioned in the documentation. The first two are about cleaning up the old revision entries from the database. The table REPOSITORY_LOCAL_REVISIONS holds the information on up to which journal entry the node in the cluster has caught up. Entries older than the lowest revision in that table can be safely deleted from the REPOSITORY_JOURNAL tables. Executing these queries does not require any prior information about the cluster nodes and their ids: These SQL queries are static, not dynamic.

There is one more query that should be executed which is dynamic and that is about cleaning up the entries from the database that are associated with the inactive (dead) jackrabbit cluster nodes.

In the query above one would replace “%s” with the array of active pod ids.

To illustrate this consider the following diagram:

A Word of Caution Regarding Native Jackrabbit Janitor Process

Apache Jackrabbit provides a ‘janitor’ task which automatically removes old revisions. Although at first this sounds like an automatic solution to the issues described above, it is not. The usage of Jackrabbit Janitor is discouraged in cloud environments. Janitor makes it difficult to add new jackrabbit nodes to the cluster. Also, the janitor will not delete the ‘forever dead’ jackrabbit node entries from the REPOSITORY_LOCAL_REVISIONS table. There is no option but having an external process taking care of maintaining the revision tables in the database.

In our documentation the repository.xml examples contain ‘janitorEnabled=true’. This setting is provided as enabled by default for traditional (non-containerized), on-premise deployments. 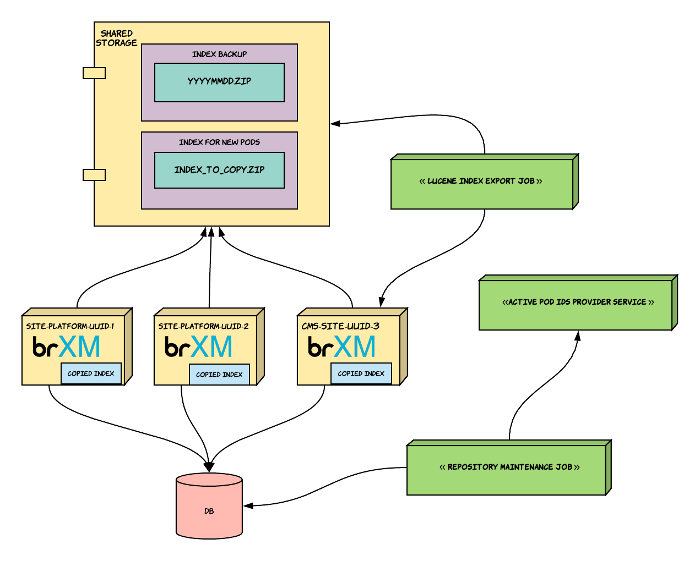