When you select a specific replication target in the target dropdown (brXM 15.1.0 or later), the page shows the current status and error messages of the selected target and allows operations on it. Operations on a target are performed independently from other target(s) in case you have multiple replication targets. 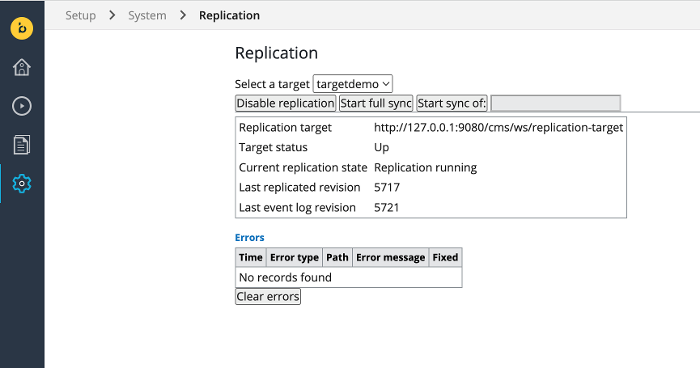 When you first deploy your project, the target(s) must be brought in sync with the source. The amount of time this takes depends heavily on the amount of data to be transferred. During a sync, regular replication processing based on changes to the repository is suspended. After the sync has completed, regular replication processing is resumed and the backlog of changes built up in the meantime is processed.

When for whatever reason it happens that some document or folder in the target becomes out of sync with the source you can always run a partial sync on that document or folder to bring it back in sync. Under normal circumstances this should never occur though. Enter the path to the node to be re-synced and click the button to initiate the partial sync. As in the case of a full sync, this will also suspend regular replication processing until the partial sync has completed.

When the source cannot reach the target due to the target being down or because of a severed network connection, error messages will be shown indicating the problem. Other error conditions are also reported in this way and may be monitored by an administrator. The replication engine can recover from some of these error conditions automatically. When that happens, a successful recovery is indicated by flagging the error message as fixed. Currently the only error condition from which replication engine knows how to automatically recover is when an ancestor of a unit of replication is reported missing on the target. In that case a partial sync rooted at the missing ancestor is automatically scheduled.